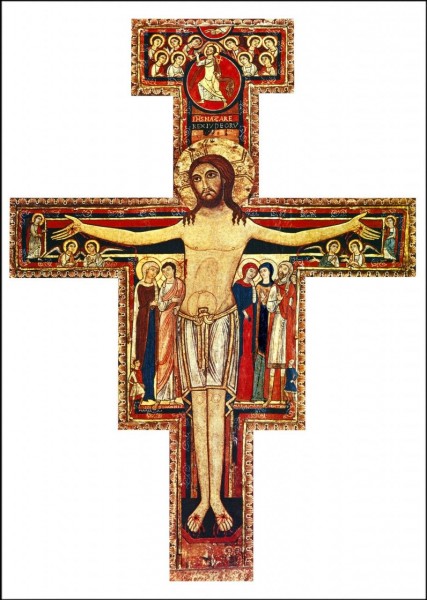 Toward the end of the year 1205 as Saint Francis was praying before the painted crucifix in the Church of San Damiano he heard these words: “Francis, go and repair my house which, as you see, is falling completely to ruin.” Within recent years we have seen many pictures of this crucifix upon which Francis was gazing when he heard this command from Christ.

As we actually look upon a picture of the San Damiano crucifix we see more of a glorified Christ than we do of a suffering Christ. We also notice many other persons included in the picture.

In the painting by Christ’s right side, we see Mary, Our Lord’s Mother, and John, the beloved disciple; by his left side, we see Mary Magdalene and Mary, wife of Cleopas and the Roman centurion (who attests with his right hand the divinity of Christ). On the lower left side of the painting, we see Longinus (the soldier who pierced the side of Jesus) and on the lower right side of the painting we see Stephen (the guard of the temple, who offered Jesus the sponge soaked in vinegar). Behind Our Lord’s outstretched arms we see the tomb represented. Four angels, two on each side beneath the outstretched arms of Christ, seem to be discussing the significance of the mysteries depicted and are being purified by the Blood of Christ (as is John and the other persons in the painting). Two other angels, one on the right and the other on the left may be attesting to the empty tomb. Some speculate that these two figures represent the women who arrived at the tomb on Easter morning. Below the feet of Christ there seem to be six figures. The two on the right seem to be Saints Peter (observe the rooster) and Paul. Probably the other four persons included in the painting would be Saints Damian (the Patron of the Church), Rufinus (The Patron of the Cathedral in Assisi), Michael and John the Baptist.

We also observe the halo of glory on this triumphant cross instead of the crown of thorns, the inscription “IHS Nazare Rex Judeorum,” the Ascending Christ above the inscription (notice the index finger on the right hand), the “welcoming” hand of the Father, and the ten angels or saints in union with the resurrected Christ.