Starting today, you can join Franciscan University of Steubenville president, Father Dave Pivonka, TOR, for a deeper look at the life of Christian discipleship and ongoing conversion in his new video series, Metanoia: A Journey With Christ Into Conversion.

Filmed on location in the Holy Land and beautifully produced by 4PM Media, the 10-episode Metanoia series examines what it means to have our hearts changed by a relationship with Christ.

Available for viewing at wildgoose.tv at no cost, the series begins with “Who Do You Say That I Am?” In this episode, Father Dave takes viewers to Caesarea Philippi, a site of pagan worship and idols, to ask us the same defining question Jesus asked his Apostles.

One new episode will be available every Monday through April 6, with an 11th and final episode coming out on Pentecost, May 31.
The series also offers a study guide to help viewers examine their own lives more closely, which makes it ideal for parish and small group programs.
Come, Holy Spirit!

February 10 – What Must I Do to Inherit Eternal Life?

March 23 – Jesus’ Power Over The Evil One

March 30 – This Teaching Is Hard

Franciscan Season of Caring for Creation

The 40th Anniversary of our Rule Celebrated around the World

My Sister and Brother Franciscans,

May the love of God, and the Blessings of our Seraphic Father Francis be with you.  I write to you today to ask for prayers.  Jesus has called us to be the salt of the earth.  St. Francis has said, “I have done what is mine to do; May Christ teach you what is yours to do!”  Abortion has been legal in the United States since 1973.  Recently, legislation has been enacted and/or proposed to ease the restrictions on late-term abortion, and/or even allowing the infant to die after birth.

We Franciscans are called to be instruments of peace, love, pardon, faith, hope, light, and joy.  I have discussed the following proposal with my Fraternity Minister, Steve Wolf, OFS, and communicated the same with the Regional Minister of the St. Margaret of Cortona Region, Bob Longo, OFS.  I thought, how powerful would it be if all the members of my Fraternity in Harrisburg, Pennsylvania all said the Crown Rosary on the same day to combat the evil of abortion spreading in our country.

Further, how powerful would it be if all the Secular Franciscans in the St. Margaret of Cortona region joined us.  And how so much more powerful would it be if all the thousands of Secular Franciscans in the United States also joined us.  A member of my Fraternity, Ken Ritchey, OFS, suggested that Good Friday would be ideal.  So, my fellow Franciscans, what say we “storm heaven” this Good Friday by saying the Crown Rosary to help all of our fellow brothers and sisters in this country who are caught up in this evil, and to help save lives, and souls.  We can pray individually, or in communion with other Franciscans, either privately or publicly.  What say we make our Seraphic Father proud!

Yours in the peace of Christ, 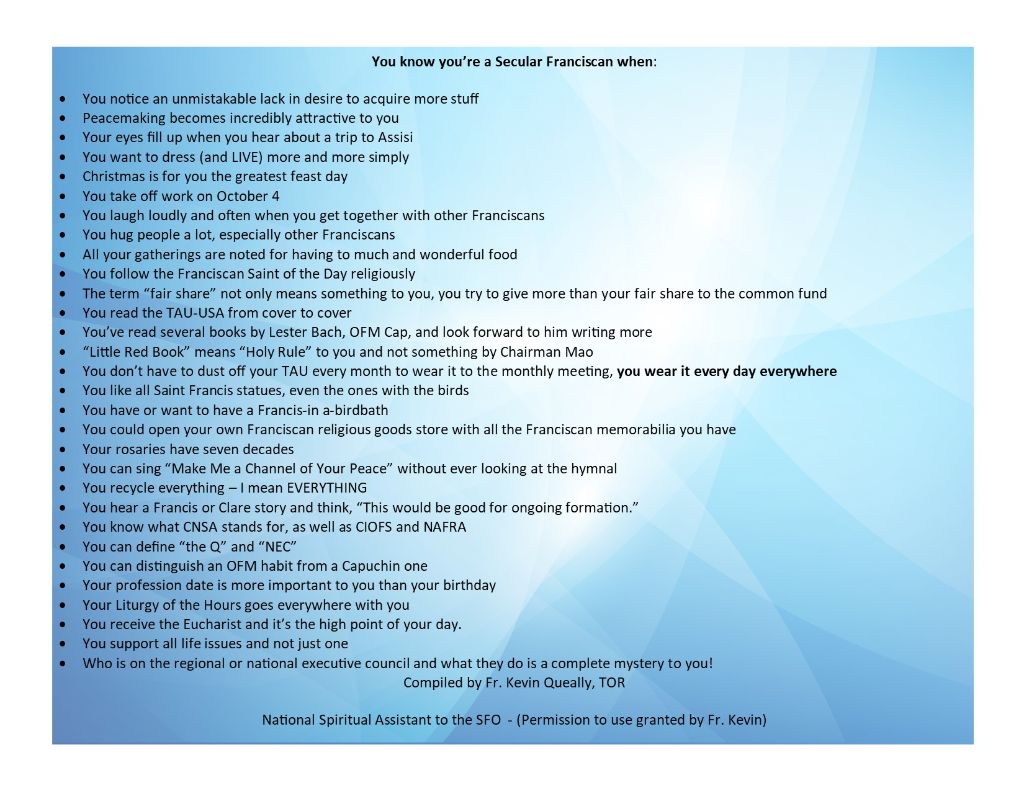